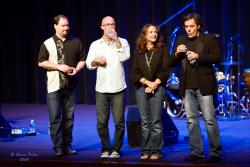 There are no EFO shows this month, but we do have Robbie's big release date on the 12th (see below). We hope everyone had a great Thanksgiving and a safe Black Friday.

Speaking of holiday shopping, all your EFO stocking stuffer needs can be found at

It's pretty much become an annual tradition:  a three-night run at the Birch to

kick off the New Year (right before Inauguration Week, and Monday is Martin Luther

King Day).  This year we're pleased to have Jake Armerding join us on stage all three nights.  Many of you remember him from his stellar performance with us at Wolf Trap this past August.  He will also be opening Friday & Saturday's shows - a great solo act. Opening Sunday night will be the fabulous Red Molly, a female trio from the Northeast who came together at the Falcon Ridge Folk Festival from late night jam sessions. They've also contributed to Robbie's new solo CD.  We're also pleased to announce that, like last year, we will be recording our set each night and selling CDs at show's end.  These CDs will only be available on those nights.  Another tradition is that these shows tend to sell out in advance, so don't delay being part of our great hometown rite of passage.

On Friday, December 12, at Jammin Java in Vienna VA, our own Robbie Schaefer

by tunesmith Schaefer.  Not only is the CD produced by the multi-talented

by John Jennings, but JJ will be joining Robbie on stage at this special

other events coming up for Robbie include:

Have a Very Merry December!